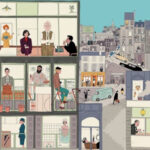 Wes Anderson’s latest film is a visually stunning cinematic experiences, albeit not an emotionally engaging one.

Milan, Italy.
I finally saw The French Dispatch, the new film directed by Wes Anderson. This is a tricky one because, as a long-time aficionado of the Texan director, I’ve had to separate the fan from the critic in order to write about what is a far from perfect film. I found it an aesthetically powerful film, like all Anderson‘s films, but also terribly unglued. It almost seems like the caricature of the director’s typical film, but in a literal sense, that is, every characteristic aspect that we find in his filmography appears exasperated. It gave me the impression of wanting to appear bizarre at all costs but not with the usual elegance, which in fact seems to exist but as if it were distorted and exaggerated to the point of being annoying, at times I found it almost hermetic and hard to understand in some narrative and directorial choices, in the sense that I didn’t understand why to get to such a scene when you could focus on something simpler. In short, if on the one hand we have a technical side and an image facade bordering on the unexceptionable, on the other we can have several reservations. The characters, although played with great verve by the numerous actors of a certain weight, do not always leave their mark. The interpretations of Benicio del Toro, Adrien Brody, Tilda Swinton, Léa Seydoux and Frances McDormand are highly appreciated. But if we stop letting Timotheé Chalamet play the hipster kid in almost every movie he appears in, I’d be thankful.

The French Dispatch is, as I previously mentioned, one of the most visually curated and enjoyable works ever. We all know Wes Anderson‘s style very well, but at the same time we never know what we are going through when we start one of his films. The care of photography is, as always, obsessive and the choice to use black and white to enhance the moments of colour is certainly interesting. One wonders what it would have been like if the whole film had been entirely in colour. Think of the astonishment that almost everyone felt when Saoirse Ronan‘s eyes lit up with crystalline blue or when we saw Rosenthaler’s works for the first time. Would it have been more impactful to have the whole film in colour or does the fact that it is partly in black and white make us appreciate the colourful scenes more?
I tried to briefly analyze the articles in the latest issue of the newspaper:
– The cycling reporter is entirely in colour. This first story introduces us to Ennui, the French location where all the other stories take place;
– A concrete masterpiece lights up in color when we are shown the works of Rosenthaler (surely causing us a greater amazement than if we had seen the whole story entirely in color). This story, which is also my favorite one, teaches us to separate the artist’s art: Rosenthaler is a mad murderer, yes, but he is also an amazing artist;
– For Revisions to a manifesto trying to follow a logic is already more difficult. The story begins in color but continues alternating black and white. It focuses, even if at times implicitly, on the difficulty and almost impossibility, as also stated by a character, of maintaining narrative and journalistic neutrality;
– The Commissioner’s Private Dining Room begins in color and then becomes black and white as Jeffrey Wright‘s character begins to tell the story, but Nescaffier’s food is shown to us in all its colourful glory (the taste almost transcends the screen). Unforgettable and mind-blowing is the chase scene transformed entirely in colour and animated.

Do not forget the scenes in which the newspaper articles are wrapped: the initial presentation of Arthur Howitzer Jr, the editor of the newspaper and his final obituary, both in colour.
Wes Anderson‘s latest work is a remarkable visual experience but, although the newspaper-like narrative structure is well balanced and robust, some parts are overly full of content and it becomes very difficult to assimilate all the details that are inserted one after the other (think of the last story: on the sides of the screen the narrator presents the chef’s dishes with a description below, in the center the scene continues to flow and subtitles appear that explain the Commissioner’s plan). Bottom line, mind-blowing photography makes up for what, in my opinion, doesn’t work. It is nevertheless a Wes Anderson film, so don’t miss it.
Photo courtesy by, Property of Searchlight Pictures.