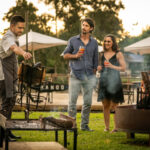 Traditions rooted in the distant southern hemisphere, all to be discovered and experienced, such as: throwing good wishes to the sky, playing Secret Santa, celebrating the night of the 24th and trying the unmissable vitel toné.

The Christmas tradition has accustomed us to live Christmas between snowy and cold atmospheres, Argentina welcomes the most awaited gift season of the year with summer vibes, warm weather and the typical warmth of its inhabitants.
A special energy accompanies Christmas in Argentina, where the climate allows you to celebrate outdoors, in the gardens, on the beaches, spending the whole night illuminated by the light of the moon, the heat of summer and delicious cuisine. evocative.
So, if you decide to spend Christmas in Argentina, you will find below everything to write down on your travel list.

This is not something new: food plays a crucial role in Argentina. It’s the perfect excuse for a meeting, especially when Christmas comes. Actually, there is a whole ritual for it. We start with a picada or meat and cheese platter, then cold dishes for all tastes (remember, the weather calls for that), and to wrap up, the table gets loaded with Christmas sweet things.
Of course, love for gastronomy is a year-round tradition, but on December 24th, certain dishes are always present. Fans may say that it is unnecessary to wait until this time of the year to indulge in these delicious meals, but truth be told, there is a flawless podium in Christmas dinner.

Vitel toné: it is an Italian dish, specifically from Piamonte. Why do we eat it? Due to the immigration flow in the 19th century, when thousands of Italians crossed the sea to settle down in our country. Lots of culinary traditions came along with them, including this star dish. It is made up of bovine meat and a sauce of tuna, oil, mustard, and anchovy. Capers are added on the top to finish plating.

Suckling Pig: meat is the star in most meetings where food is involved across the country. In this case, the pig is prepared before the celebrations, and it’s eaten at room temperature, accompanied by salads, pies, and more.

Olivier Salad: a dish made up of everything but greens. It is a mix of boiled potatoes, carrots, beans, and loads of mayonnaise. It can be a side dish or a starter.

Stuffed Tomatoes: what the name implies. A fresh combination that shines every year when it comes to celebration. It has tomato with a rice, tuna, cheese, and mayonnaise surprise. Actually, you can stuff it with whatever you like.

Pan dulce: it has both lovers and opponents. The recipe has Italian roots, translated into panettone, and it has been around for more than 500 years. As its name points out, it is bread with butter and sugar, which can have raisins, candied fruits, and even chocolate.

Turrón: a sweet ‘snack’ related to Spanish traditions. It’s a delicious almond confection, and you can find a soft or hard version. Which one is better? That’s hard to say because both are a delight.

Contrary to what you may imagine, Secret Santa doesn’t make us recall a distant childhood. Actually, it is an adult game here, and it does not only take place on New Year’s Eve. Many groups of youngsters, relatives, and adults play it during the last days of the year.

Why is it so? Christmas is the perfect excuse to receive a gift, and this idea is just right for Secret Santa dynamics. Rules are very simple. Each player is randomly assigned someone to whom they’ll give a present. All gifts are left under the Christmas tree, and at midnight, each person opens their present. It’s just then when the secret identities are revealed, and the mystery of who each person’s secret giver is solved.

3. Wait for Santa Claus Until Midnight

Maybe it’s our passion, anxiety, or Argentinian’s hot blood that won’t let us rest knowing that the famous and world traveller Santa Claus is soon coming. Unlike many other destinations across the globe, both adults and children wait for the classic “Ho Ho Ho”. As soon as the hands show the first minutes of the 25th, hugs are multiplied, boxes unwrapped, toasts made, and the long-awaited “Merry Christmas!” heard. Midnight is not only received wide awake for Santa Claus’ presents, but also to go on partying until the crack of dawn.

Christmas brings along several celebration headquarters, especially in the cities. The dining feast is just the beginning (a family start) because the subsequent party is with friends, and it lasts until the crack of dawn. Clubs open, there are outdoor gatherings, and summer vibes in every song.

5. Light up the Sky with Fireworks and Balloons Full of Wishes

New Year’s Eve is not the only moment when goals are set and wishes made in our land. Actually, there’s a tradition at Christmas in which we lit a white balloon that will go into the sky loaded with wishes. The night sky gets covered with the image of whitish dots that get confused with the stars as they go up on the cloak of darkness.

Fireworks are also present during the celebration. Making the sky shine with colourful powder is a celebration symbol that goes beyond borders. In this case, the midnight portrait lightning up the sky has one-of-a-kind energy.

6. Give Pink Underwear as Present

Did you think we were over? Of course not. This tradition applies to the female members of the families. It’s a simple present that is always under the Christmas tree, yet the reason behind it is quite singular. Common knowledge says a woman should give another woman pink underwear as a symbol of love, good luck, and good wishes. A curious fact? They have to wear the item for the first time on New Year’s Eve.
Photo courtesy by Visit Argentina.