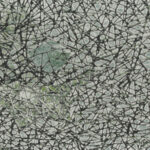 Rubelli supports the arts and the Peggy Guggenheim Collection with “BEYOND”. A luxurious silk lampas inspired by the work of artist Claire Falkenstein (1908-1997) and her 1961 masterpiece “Entrance Gates to the Palazzo” at the Peggy Guggenheim Collection in Venice. A portion of the proceeds from the sales of “Beyond” will be donated to support the activities of the museum.

Rubelli in support of art

Beyond was born from Rubelli’s desire to support the arts, and specifically, the Peggy Guggenheim Collection—one of Italy’s most important museums dedicated to European and American art of the twentieth century. Throughout the years, Rubelli has had a long-term collaboration and friendship with the museum, participating in the Guggenheim Intrapresæ corporate membership project since 2002.

Silk is inspired by the art of the museum

With this exciting project, Rubelli utilizes its skill and experience in the textile field, creating a silk lampas that is inspired by the work of Claire Falkenstein. The iconic and historically significant gates that have welcomed museum visitors for decades at the entrance to the Palazzo Venier dei Leoni.

With their magnificent jewel-like clusters of Murano glass fused to iron webbing, the gates exemplify Falkenstein’s signature style and reflect the craft of glass, long associated to the city of Venice. Falkenstein intended the work to convey an open flow, with movement, and she stated, “[…] If I can reach through and touch the other side, if I may look through and focus beyond, my feeling verifies the idea that motion is space”.

Affects the brightness and the passages of light and shadow

In the design of Beyond, interconnecting, dancing lines become a symbol of infinite space where elements evoking the glass parts of the gate can be interpreted as meteors, planets, or heavenly bodies. The iridescent effect of the silk of the Rubelli lampas—a successful transposition of a metal object in fabric—makes an impression with its brightness and play of light and shadow.

In support of the museum

Rubelli dedicates Beyond to the Peggy Guggenheim Collection and commits a portion of profits from its sale to the cherished museum—a private, non-profit foundation which has suffered significant losses due to the long closure caused by the Covid-19 pandemic.