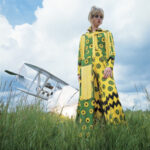 The fashion that conquered and transformed the world in the 60s and 70s, on stage in a major exhibition in Prato and Milan. A project of Museo del Tessuto di Prato and the Sozzani Foundation in collaboration with Archivio Massimo Cantini Parrini. Curated by Federico Poletti.

Stylised geometries, floral bouquets and patterns inspired by art (ranging from medieval tapestries to Ballets Russes to all the Cubist avant-garde and pointillism): the Ossie Clark defined the language of Swinging London with his long, colourful, fluid clothes.

With his unmistakable “flower power” style and one step ahead of new trends, Ossie was called the “King of Kings Road” thanks to his 1930s and 40s-inspired dresses with a slender cut that revealed the décolleté amidst sensual movements and plays on transparency. His short, but very intense, career left its mark in London in the period from 1965 to 1974,1 between Mary Quant’s miniskirt and the subversive punk movement of Malcolm MacLaren and Vivienne Westwood. Clark and his wife Celia Birtwell (Mr and Mrs Clark and Percy, from David Hockney’s famous painting at Tate Britain, 1970-71) came to define the bohemian neighbourhood of West London that was home to the new generation of brilliant and revolutionary youth.

Celia drew prints on light crêpes, silks and chiffons, and Ossie transformed them into clothes that immediately conquered the international jet-set and the pop scene. From Brigitte Bardot to Liz Taylor or Verushka, everyone was fascinated by their fashion. Mick Jagger, Brian Jones, Keith Richards, Jimi Hendrix, Marianne Faithfull, Anita Pallenberg, Eric Clapton, George Harrison, Bianca Jagger, Marisa Berenson: these are just some of the people that Ossie Clark dressed. When Hockney painted Ossie and Celia in their Notting Hill home, he depicted a snapshot of modern life, a perfect representation of the world of Clark and Birtwell, whose projects embodied a new, courageous way of life. Ossie was also the first designer to reconsider the idea of “occasion”: for him, evening dresses could be worn during the day and vice versa, while he invented the nude look with his transparent chiffon.

Starting from a first important nucleus of clothes from the collection and archive of Massimo Cantini Parrini, the Museo del Tessuto di Prato and the Sozzani Foundation have dedicated a vast retrospective to the couple which will open in September 2022, recounting the incredible creativity of these two personalities who are often neglected in the history of fashion. Rare pieces from the private collections of Celia Birtwell from London and Lauren Lepire from Los Angeles complete the museum’s exhibition.

Under the patronage of the National Chamber of Italian Fashion, the exhibition will open Sept. 16 at the Museo del Tessuto in Prato and arrive in January in Milan at the Fondazione Sozzani. The itinerary not only features a series of dresses with Ossie and Celia’s iconic prints, but aims to tell the story of the designer’s context and evolution, from the Quorum boutique in Chelsea, frequented by the youth of the London scene to performances, through a series of videos, period photos and editorials, memorabilia, sketches and reproductions of the designs, to an exclusive video interview with Celia Birtwell herself.

Unforgettable muses such as muses Jane Birkin and Amanda Lear

Also considering how his fashion was presented, Ossie Clark was the first designer to extend the concept of performance to fashion shows, proposing them in the most diverse places, for example the Royal Court Theatre in 1971, with the musical contribution of David Gilmour, one of the founders of Pink Floyd. His muses included Jane Birkin and Amanda Lear, who participated in his fashion shows for years, up to Celia herself from whom he separated in 1973, all the way up to his last A/W 1974 collection presented at King’s Road Theatre, which marked the end of their “golden age” and the change of an era

“The exhibition is a celebration of his life and work. It’s important to keep Ossie’s flame burning and his work must not be forgotten. Professionals and students can still learn a lot from his pattern cutting and his style. He is still an inspiration for so many people and his clothes still look relevant today, a vision of a woman who is sexy and feminine, but never vulgar.”

Celia Birtwell, wife of Ossie Clark and author of the prints and textiles

“We care a great deal about this exhibition project, which I consider to be highly innovative, both in terms of its content and its operational and organizational methods. The garments and documentation on display are extraordinary and perfectly document the artistic relationship of these two great protagonists of 20th century fashion. We are very happy to start the collaboration with Fondazione Sozzani in a cultural project that connects Prato and Milan, as well as to renew the friendship and collaboration with the great costume designer and collector Massimo Cantini Parrini.”

“In art and fashion one often encounters the role of the muse: Celia Birtwell and Ossie Clark are among the famous couples where one can never tell where one’s creativity ended and the other’s began. The Botticellian gowns of one and the dreamlike prints of the other, together they experienced a creative complicity that spawned a revolution in dress and a magic that defined an era of fashion.”

“The discovery of Ossie Clark and Celia Birtwell within Massimo Cantini Parrini’s collection has allowed to bring a chapter that is sometimes neglected to light, conveying this extraordinary creativity combining fashion, art and music. Ossie and Celia is also the story of a special alchemy, one of the first creative couples in which a designer and a textile designer worked together to complete each other in total harmony.“

“This exhibition recounts the journey and creative partnership of two artists who revolutionised and forever changed fashion, all within a single decade, inspiring many generations of future couturiers with how they reinterpreted the art of prints and the design of lines. I am honoured to have discovered, studied and collected their clothes.”

The exhibition and the catalogue – Mr & Mrs Clark | Ossie Clark and Celia Birtwell – pay tribute to two people overflowing with ideas for the new generations, and with a bridge connecting Prato and Milan, they represent a concrete demonstration of the collaboration between institutions working to promote the culture of fashion through exhibitions and publications.

The book will be presented at the opening in September at Museo del Tessuto di Prato, and includes contributions by journalists and experts including: Suzy Menkes, Antonio Mancinelli, Renata Molho, with Cristina Giorgetti, Giorgia Cantarinini, Antonio Moscogiuri,Beatrice Manca, as well as unpublished interviews with Amanda Lear and Celia Birtwell.