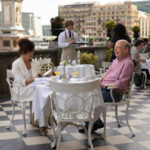 After not being granted any distribution in the United States and a difficult production process, Rifkin’s Festival, set during the San Sebastian Film Festival, has finally hit theatres across Europe. Could it be Allen’s goodbye to cinema?


Milan, Italy.
No matter what the modern public perception of Woody Allen’s persona may be (particularly in the United States), there is still something magical about getting out of the house and driving to a theatre to watch his latest work, especially after cinemas were closed for almost a year. At 85 years of age, with 50 movies directed, Allen still offers his usual idea of cinema by turning mundane, familiar and at times even repetitive stories into literal ‘celluloid dreams’, as one of the characters in his last film, Rifkin’s Festival, actually says.

The San Sebastian Film Festival is the occasion for which Mort Rifkin, played by Wallace Shawn and his wife Sue, played by Gina Gershon, leave New York. Mort, a retired film teacher who is trying to write his first novel, suspects that his wife is having an affair with a young up and coming director, Phillipe, played by Louis Garrel. The ‘city-as-a-character’ trope has been one of the recurrent elements of Allen’s work, as the iconic and irreplaceable New York setting that highlighted his earlier work has slowly given way, in the 21st Century, to the use of European cities as shooting locations (not as much due to plot necessity rather than budget and promotional opportunities). Paris, London, Rome and Barcelona have all been characters in one of Allen’s fatigues, with the Spanish city of San Sebastian being the latest location. The picturesque promenade of La Concha Bay, the beautiful beaches, the old town (Parte Vieja) and the world-renowned restaurants and bars all come together to paint the picture onto which the plot unfolds. One thing that, however, may come as a surprise is the fact that on this occasion San Sebastian does not play a major part in the story as, for example, Paris did in Midnight in Paris (2011). The only major contributing element of San Sebastian is in fact its film festival, as Allen finds himself exploring one central theme in the picture: cinema.

A Love Letter to Cinema (But Not All of It)

Rifkin’s Festival communicates all of Allen’s love for cinema, both thematically and visually, in a way that has not been as clear in the director’s work since The Purple Rose of Cairo (1985) and Stardust Memories (1980), which was greatly inspired by Federico Fellini’s 8 ½ (1963). Fellini, indeed, is again touched upon in Rifkin’s Festival, which, just like the previously mentioned films, relates cinema to the theme of dreams, as in fact our protagonist Mort has recurrent dreams made in the style of some of his favourite directors like, again, Fellini, Godard, Buñuel, Wells, Bergman and Truffaut. In a way that, from the point of view of the screenplay, could be seen as a parody, while, on a stylistic level, is a proper homage to those previously mentioned auteurs, Mort, and in turn Allen, shows his love for the cinema he grew up with and ended up studying. On the other hand, however, there is also a great deal of criticism towards newer forms of cinema, embodied in the film by the hypocrite ‘anti-war’ films made by Phillipe. In a recent interview, indeed, Allen had stated that he does not watch too many new films as he is not drawn towards them as he much as he is drawn towards films from his youth. Such a stance has become a stable of ‘mature’ directors, as both Martin Scorsese and Francis Ford Coppola have shared similar opinions.

Is It a Goodbye?

Rifkin’s Festival is about a cinephile who does not understand what cinema has become. It is a film made by someone who thinks today’s cinema has lost its quality of being a ‘factory of dreams’, so, in short, he tries to offer the audience exactly that type of experience. This is a product that could have perfectly come out in the 70s as well as today, and for that reason it may be considered obsolete, but that’s not the word I would use. I would in fact call this movie ‘unnecessary’. It does not add anything to Allen’s legacy nor to cinema as an art form in general. It is surely a pleasant experience for Allen aficionados and cinephiles who are not too interested in the controversies surrounding the director’s private life, but apart from that, Rifkin’s Festival is a picture that, despite its technical virtuosity (in particular the cinematography of the legendary Vittorio Storaro), feels like the bitter outburst of an old man, and rightly so (the man is 85 after all).
Furthermore, what has been a stable of the films of Woody Allen is the pure and quite open glimpse the director gives us into his mind, and that is why perhaps some of the themes he has delved into throughout his career could be considered by some as redundant. In Rifkin’s Festival all those themes are explore: infidelity, mediocrity and the most crucial one, the fear of death. That is what the last scene of the film explores (without going too much into detail): the fear of death has been one of Allen’s most interesting themes, and this film feels like the culmination of a personal journey towards (partly) accepting death, so much that he ends up talking to it. That is why I think Rifkin’s Festival will be his last film: he does not have anything left to say, he’s accepted his fate (something that Allen had historically never been prone to do) and he is now too old, too tired of these first-world problems that chase him, and feels like cinema has gone on leaving him behind. He can still make pleasing movies, sure, he is a genius after all, but Rifkin’s Festival is less a film, and more an artistic eulogy (for him and the cinema he belongs to).

Rifkin’s Festival is in theatres now.