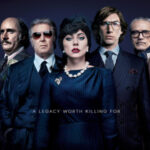 Ridley Scott’s latest fatigue explores the assassination orchestrated by Patrizia Reggiani on her husband Maurizio Gucci. It is over the top, campy but mostly mediocre.

Milan, Italy.
I recently managed to get back to some of the biggest releases of the year, which happened to come out in somewhat the same period, including that of legendary director Ridley Scott: House of Gucci. I love Ridley Scott and I think he’s a great director, but it’s undeniable that he’s gotten a bit inconsistent in recent years; nowadays it is hit or miss with him. And for heaven’s sake, with his age (84 years old!) it is to say the least understandable, so hats off that he is still so productive. I don’t, however, understand how he could have come out a few months ago with the brilliant The Last Duel (2021) and then with such an incredibly mediocre, generalist and trashily commercial film. It is a didactic, by the numbers work, which lasts two hours and forty minutes, but which seems to be eighteen hours long, with sometimes excellent, sometimes ridiculous performances. For example, if Adam Driver and Al Pacino are two acting giants, Lady Gaga and Jared Leto have often made me nervous about how annoyingly over the top they are (the accents, for the love of God!)

The story of the Gucci family would be incredibly interesting, but here they have unnecessarily lengthened the duration of the film, making it extremely excessive for what they wanted to tell. They could have cut a good forty minutes, not to mention that here we have one of the problems that bothers me most. I can’t understand, indeed, why there are still films that in 2021 fail to make you understand how much time you spend inside the story: in a scene in the central part we read “1983” on the screen, but after half an hour one of the characters is reading a newspaper from which we learn that we are now in 1994. But when did these 11 years pass, if this is not perceived in the film? Finally, the directing is really nothing special. In The Last Duel there were moments when the camera made crazy movements, like the final duel which is shot in an incredible way. Here, however, I have not seen flashes, everything is slow to the point of exhaustion. The only really positive note is the music, which was used really well. Side note: I’ve gotten really tired to see the Italian people represented as a mass of uncultured peasants who dress like they’ve never come out of the 50s regardless of the era represented, I don’t know about you.
Photo courtesy by, Property of Metro-Goldwyn-Mayer (MGM).