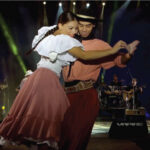 Chamamé, the popular Argentinean dance, typical of the province of Corrientes in the Litoral region, represents important values such as love for the land, respect for nature and friendship, among others.

A dance born between places of extraordinary beauty

In the Northwest of Argentina, at the core of the Litoral region, lies the Province of Corrientes.  Just like its neighboring provinces, Misiones and Entre Ríos, it is bordered by the mythical Paraná and Uruguay rivers, which give it an unparalleled beauty.

The city, which bears the same name, is one of the most important ones of the Litoral region, with a busy daily pace and beaches that gather plenty of tourists in the summer. In the interior of the province, on the other hand, there are remarkable sites such as the Esteros del Iberá, an amazing wetland, the second largest one worldwide, with over four thousand species of flora and fauna: almost 30 per cent of the recognized species in Argentina.

“Argentina and the Province of Corrientes are highly honored by the UNESCO recognition. Congratulations to those who worked hard to get this acknowledgement, which gives our country one more element to show this product in the international market. Chamamé reflects hospitality, harmony and respect among people.  It gives world tourism another reason to visit us and learn about our amazing culture”, highlighted National Bureau of Tourism Promotion’s Executive Secretary Ricardo Sosa.

Corrientes is well known for its traditions, fishing and Chamamé.  And it was Chamamé that accomplished world recognition by being declared Intangible Cultural Heritage by UNESCO.

This achievement is undoubtedly the result of many Argentine generations which shaped a culture characterized by respect for others and comradeship. Chamamé is a dance that represents great human values such as friendship, care about nature and living together in harmony.

With sapukay as an emotional strong cry, this dance is one of the symbols of the Litoral culture, which today has enhanced its value on a worldwide scale.