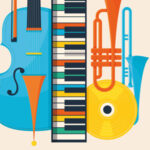 “Live in the Lobby”, four events dedicated to symphonic music that will welcome the public in the large and welcoming foyer of the theater.

Milan, Italy
Sunday, 5th of September the TAM Teatro Aricomboldi of Milan opened its doors for the first of four concerts named Live in the Lobby that will be held over the coming weeks. The concert, hosted by the Orchestra Filarmonica Italiana Brass Ensemble, comprises a variety of compositions and genres, like Ottoni all’Opera by David Short, Three Brass Cats by Chris Hazell, The Easy Winner by Scott Joplin and a medley of Ennio Morricone’s most notable work, from The Good, The Bad and The Ugly theme to the Once Upon a Time in the West theme, as well as fragments of Verdi and Bach’s works.

The TAM Teatro Arcimboldi Milano has always shown great versatility in its artistic offers, and therefore a collaboration with the Orchestra Filarmonica Italiana is a perfect match.