HomeAppuntamentiCulturaEnglish channelNothing is Lost: the Trilogy of Matter finds its continuation with a reflection on change in times of great change 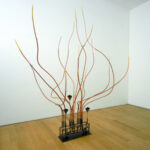 The second chapter of the Trilogy of Matter opens on 14th October at the Gallery of Modern and Contemporary Art of Bergamo. The exhibition will form part of a bigger project reflecting on the history of scientific discoveries and the development of aesthetic theories as a parallel.

Bergamo, Italy.
Involving experts from a variety of fields, art historians, scientists and philosophers, the exhibition aims at continuing the dialogue on matter opened by the exhibition of 2018, Black Hole. Art and Materiality from Informal to Invisible. This first collection, in fact, initiated a three-year-long research project that will explore the true meaning of matter by showcasing artworks that elaborated the concept of materiality. The final objective was to go beyond the mere superficial and tangible truth and unravel a deeper level of existence that involved “matter”, as the primordial constituent of all things. The first exhibition was divided in three main sections dedicated to different stages of research on the topic: the first one looking at materials as entities on their own and not as tools to shape and create novelty, the second one focusing on the human condition in relation to materiality with artworks showing anthropomorphic features and the third one looking at the invisible elements of matter, embarking on a journey into the minuscule and subatomic.

After the reflection on matter itself, Nothing is Lost. Art and Matter in Transformation, curated by Lorenzo Giusti, director of GAMeC, and Anna Daneri, independent curator, will consider the metamorphosis of matter, its mutable nature and on time, drawing inspiration from the flow of the elements. Springing from the law of conservation of mass by Lavoisier, the considerations of the exhibition will linger on the intrinsically everchanging condition of things linked to the scientific discoveries linked to Lavoisier’s theory, such as the theory of relativity and the gradual overlapping of the essence of matter and energy. Considerations on the chemistry of elements and on the changing of matter will also inevitably be read in an environmental key with artworks drawing attention to the impact of humankind on nature.

The nature of the exhibition, bringing together different branches of knowledge but still in dialogue with each other, will guide the visitors through a sensorial itinerary crossing the four elements, Fire, Earth, Water and Air, which will be declined as states of material aggregation and will mix to show their relationships and interactions. The exhibition will also include meetings with scientists and artists to fuel the debate on the topic of matter with the public, school trips and screenings of documentaries and movies. This interdisciplinary approach will both promote scientific divulgation and a more well-rounded and informed knowledge of the language of art and the opportunities created by it.