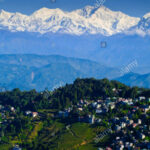 Through its beautiful and truthful portrayal of India and its culture, Wes Anderson’s “The Darjeeling Limited” (2007) explores both an physical journey across the Indian country as well as a spiritual one.

Milan, Italy.
The opening sequence of Wes Anderson’s 2007 superb dramedy The Darjeeling Limited is as telling of the film’s message as it is a rather ambiguous introduction to the film itself: a wide shot of the landscape of the Indian city of Darjeeling that has no particular focal point, until we suddenly zoom in on a taxi, recklessly driving through the streets. Inside the cab is a character played by one of Wes Anderson’s frequent collaborators, Bill Murray, who will remain unnamed for the rest of the film because, after rushing to the train station, he does not manage to actually catch the train he was supposed to get onto.

Two journeys and one train

Someone who does, however, catch that train is Peter L. Whitman, played by Adrien Brody, one of the actual protagonists of the film alongside his brothers Jack, played by Jason Schwartzman, and Francis, played by Owen Wilson. Then why did the film open with a complete stranger who does not catch the train he was so eager to get onto? The answer lies in the title of the film which, not too coincidentally, is also the name of the train. It could be argued, indeed, that the train in the film is a symbol of two journeys: one is external and literal (a discovery of India and its mysteries), the second one is an internal one (a voyage into the human psyche), and the two are interconnected with each other. Bill Murray’s character’s journey is without a doubt worth following, but he does not make it onto the train because that train’s journey is limited to a handful of individuals, and among those individuals is Peter.
India has often been portrayed in movies as a place where lost souls go to in order to ‘find themselves’, and, while at times that might be done in quite a stereotypical manner, such portrayal draws from Indian culture’s undeniable interest with spirituality. The film’s exploration of spirituality, therefore, is both achieved through an external journey throughout the beautiful settings of India and the interactions with its people, as well as an internal one which stands in the three brothers’ search for their mother, who has fled to the Himalayas to become to a nun, and their coming to terms with their own individual issues.

India as a character

One of the film’s strengths is its ability to turn its setting into a character itself. Darjeeling is portrayed as a vibrant and frenetic town, from its market and temple to its inhabitants, while the Himalayan Highway, or “Toy Train”, which the train follows, presents incredibly diverse and unique settings, each being of great importance to the unfolding of the plot. It is in these places where the Whitman brothers dance, fall in love, pray, take drugs, buy a rattle snake which later escapes, fight with each other, fight with the train’s Chief Steward who happens to be the husband of the woman Jack falls in love with, drink the renowned Darjeeling tea, go for a hike on Mount Kanchenjunga, and attend a funeral. Their character arcs are influenced and enriched by their interactions with the environment and the people living there, which ultimately happens to any tourist who travels to a new place.
What, indeed, the movie brilliantly achieves is to not let its main characters overtake the narrative, but rather let India’s cultural closeness to spirituality, so implemented into its people’s lifestyle, overtake the characters, as the three brothers live through both heartwarming and hostile experience, something that in Post-Colonial Darjeeling, which was founded by the East India Company in 1815, could very much happen to English speakers. Essentially, Indian culture never is “the butt of the joke,” like in Eat Pray Love (2009) or Victoria & Abdul (2017), but rather the “American strangers” are.
Such depiction is what ultimately makes The Darjeeling Limited stand out, as the film offers one of the most honest portrayal of India ever put to film outside of the Bollywood industry which, considering Wes Anderson’s famously “unnaturalistic” filmmaking style (something critic David Bordwell has called “Planimetric Composition”), comes as a surprise.
It perhaps becomes less of a surprise when we consider how the movie was conceived. Anderson, in fact, alongside Jason Schwartzman and childhood friend Owen Wilson, wrote the film while in India themselves, as well as on an actual train. This trip to India came, indeed, at a somewhat uncrtain time in their careers, as their previous collaboration, The Life Aquatic with Steve Zissou (2004), was neither a financial or critical success (by Wes Anderson’s usually high standards, of course), which unintentionally pushed Anderson, Schwartzman and Wilson to go find inspiration away from the Hollywood spotlight, which at times can be quite unnerving.

This point brings us to the second type of journey presented in the film: the internal one. Just like Anderson, Schwartzman and Wilson fled to India to gather ideas for a new film, the protagonists of The Darjeeling Limited all flee to India to escape from their own inner demons: Peter is terrified of his child’s imminent birth, Jack has just gotten his heart broken by his ex-girlfriend (he actually flees to Paris first, as shown in Hotel Chevalier, a short film which serves as a prequel to the main feature), and Francis is fleeing from his suicidal thoughts. Even their mother, who is the initial driving force behind the brothers’ trip, has retreated to a temple in the Himalaya due to her refusal to accept her husband’s death.
In this journey, in fact, it might be argued that the train serves as a physical representation of the act of processing of each character’s issues, as what starts off as a handful of private struggles, which a lack of communication has made hard to share, turns into a communal sense of acceptance. In the end, Francis finally faces his depression, Peter accepts to return to his wife and son, and Jack gets over his girlfriend by finishing to write a short story about their last encounter, but it does not really matter what the end is, as the message the message the film tries to convey is that the journey is the crucial part of any person’s life.

Why do we travel?

Finally, one question arises watching The Darjeeling Limited: why do we travel? Is it a way to escape from something or is it a way to find something? Personally, I think it taps into both. We travel to “live another life”, even if it is just for a few days, but when we come back into our usual lives, we are inevitably changed, and that is because we have undeniably found something on that journey that has changed us and enriched us forever, even if that something is a highly poisonous rattle snake bought in a market in Darjeeling.