HomeFood&DrinkPalagione, the story of a harvest 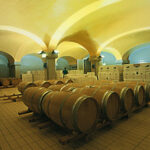 “We waited for the ancient ritual to be repeated as if it were the only certainty of the moment,” says Giorgio Comotti on a harvest that ended in the best way. And now, he expects…

Castel San Gimignano (SI), Italy.
“And so the 2020 harvest is also over, leaving us the memory of an incredible reality”. This is how Giorgio Comotti speaks, who for over twenty years, together with his family, carries on the Palagione, a splendid winery located along the road that connects San Gimignano to Volterra. A land rich in history, where wine has been made for centuries and which fascinated his wife Monica for this connection with the traditions of the past. Together, they have lived many harvests, but each one “has its own story, something that remains in your blood, in the DNA of future generations. This perhaps more than others“.

Yes, because 2020 cannot be a year like any other and Giorgio’s account of this harvest shows it. “The concern of the unsold, the irrational and forced bottling to empty the vats, a long warm summer with a surprising Sangiovese that in some cases matured before the early Merlot, had destabilized and affected us. We waited for the ancient ritual to repeat itself as if it were the only certainty of the moment, the liberation from something dark and incredible that had troubled us; we awaited something known, that even in the usual uncertainty of nature allowed us to move on a path, each year different and unpredictable, but known”.
Finally, after the repeated tastings and daily visits to the vineyard, the harvest begins.
In the end, the balance of this 2020 harvest is more than excellent. “Vernaccia already appears fresh, fragrant and savory as we like, the Sangiovese chomps at the bit as a teenager and time will make it even more pleasant”.

A result obtained with care and passion, without leaving anything to chance: “Thanks to an exclusively family run, we have obtained a scrupulous parcelling of vineyards, managing to isolate within seemingly homogeneous plots, several micro-areas. From the initial agronomic operations, we can define and subdivide the grapes according to our future products. A strictly manual harvest, followed by a separate vinification and dedicated “to every single cru of Vernaccia and Sangiovese that represent the heart of the personality of the winery“. Small details, however, at the end, give their results: “every specific element, in fact – concludes Giorgio – allows us the enhancement of a company identity well recognizable and traceable to it“.