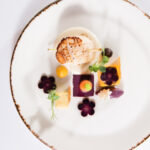 The unmissable appointment at the Kempinski Hotel Grand Arena Bansko, on 18 and 19 March 2022 where a unique culinary event for Bulgaria will take place.

Kempinski Hotel Grand Arena Bansko will surprise gourmet lovers with a unique-for-Bulgaria event at the exquisite Come Prima Restaurant on 18 and 19 March 2022. Six legendary chefs with a total of eight Michelin stars will show their passion and put on an incredible cooking show in the open kitchen of the Mediterranean restaurant of the luxurious hotel in the Pirin Mountains.

Culinary delicacies for the body and soul

The extraordinary French chefs Thierry Drapeau, Joël Césari, Jean-Baptiste Natalie, Alain Caron and Patrick Jeffroy as well as the Spanish chef Sergi Arola will be serving an extraordinary six-course menu, with each of the six chefs preparing one course. The dinners will be paired with high-class French and Italian wines and champagnes, courtesy of the long-time partner of Kempinski Hotel Grand Arena Bansko – BNK, a local market leader and importer of Europe’s most valuable brands. At lunch on 19 March, some of the stars will surprise the guests of the VIP Room restaurant, located on Bunderishka polyana, with culinary treats for their body and soul.

Live the culinary experience with the “storytellers of taste”

The background of the chefs is more than impressive. Originally from Vendée, Drapeau mixes, in his cuisine, ﬂavours from the regions of France he visited during his career. Thierry knows how to seduce with a beautiful, rich and inventive local cuisine served in his two-Michelin-star restaurant and hotel in St-Sulpice-le-Verdon.

Executive chef and owner of the Michelin-starred La Chaumière hotel-restaurant in Dole, Césari combines traditional produce with a modern style in his cooking. He cultivates the unconventional and carefully designs each plate. Chef Césari chooses the best products for his customers, not only from Jura, but from all around the world.

With solid international experience and some impressive references, Natalie became the youngest chef to be awarded a Michelin star for his restaurant Hostellerie La Montagne in Colombey-les-Deux-Églises. His signature style is inspired by wild ﬂavours. His vocation in life: taste storyteller.

Books, music and passions, the soul of the chefs

Renowned for the creative cuisine at his restaurant LAB by Sergi Arola in Sintra, Arola stands out in the culinary scene, thanks to his passion for music. A guitarist in a Spanish rock group, he’s also known as a ‘rock-star chef’.

Born in Paris, Alain Caron is a culinary expert living in the Netherlands. Together with his family, he runs a restaurant and a café – Café Caron and Petit Caron. The chef has also created 15 cookbooks. With his long years of experience, Caron will surely impress the guests of Kempinski Hotel Grand Arena Bansko.

Chef Patrick Jeffroy ran the L’Hôtel de Carantec Restaurant Patrick Jeffroy, for which he obtained two Michelin stars in 2002. His cooking style is said to be audacious and evocative, perfected over the course of his career. He loves incorporating his passion for exploring the world, creating a combination of inventiveness and classicism in each dish.
Copyright Kempinski Hotels

Due to the exclusivity of the event, reservations will be possible only when directly contacting the Reservations Department by phone +359 749 88888 or by email: reservations.grandarena@kempinski.com .